Sightseers will need a special COVID pass to visit the Eiffel Tower or go to museums and cinemas in France in a desperate move by its government to curb the spread of the Delta variant.

People must show they are either fully vaccinated, have a negative test or prove they have recently recovered from COVID-19 to get a pass.

Following a government decree, the requirement went into effect on Wednesday at cultural and tourist sites.

Image:
The pass is needed to get into museums like the Louvre

The health pass was previously only required for large-scale festivals or nightclubs, but will also be needed from the start
of August to enter restaurants and bars and for long-distance train and plane journeys.

French MPs will debate on the bill on Wednesday, which has sparked resistance from many people, with anti-vaccine protesters planning a demonstration later on.

The new measure comes a day after the country recorded 18,181 new infections in 24 hours, more than double the figure from just a week ago. 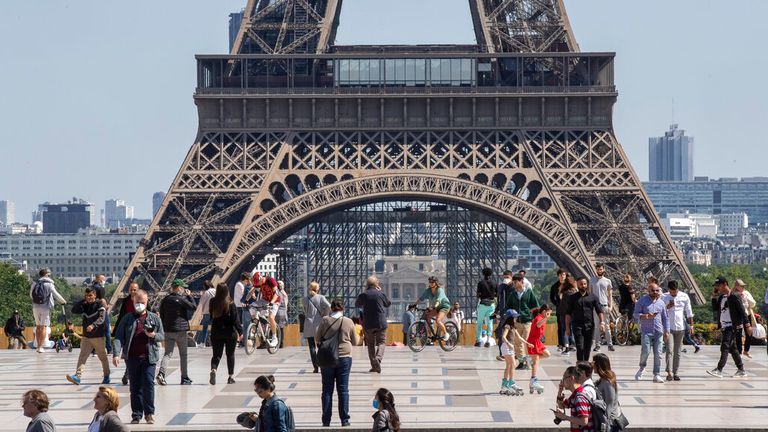 Image:
Infections are on the rise in France

France last recorded more than 18,000 daily infections on 13 May, when the country was under a nighttime curfew and non-essential shops, bars and restaurants were closed.

Some regions are now re-imposing virus restrictions amid the surge in cases, due to the Delta variant first identified in India.

It comes after holidaymakers and industry groups hit out at the late decision to make Britons quarantine for 10 days when they return to the UK from France.

UK residents who have had two COVID jabs no longer have to isolate after returning to England from amber list countries such as Spain, Portugal and Greece – and France was meant to be on that list.

But last week the UK government said France would be excluded while it looks at latest data on rising cases of the Beta variant in the country.

It means travellers must continue to quarantine for 10 days.

Latest figures show that around 37.8 million people in France have received at least one dose of a coronavirus vaccine and 30.7 million are fully vaccinated.

Its government estimates it will reach its target of 40 million first doses by the end of July – a month earlier than its initial schedule.

PMQs: Boris Johnson apologises to businesses over ‘pingdemic’ after more than half a million told to isolate