Hospital workers in Peru arrested after charging COVID-19 patients more than £15,000 per bed

Nine people have been arrested in Peru, accused of charging COVID-19 patients the equivalent of more than £15,000 for hospital beds that should have been free.

The group – including the administrators of Lima’s Guillermo Almenara Irigoyen public hospital – was arrested by Peruvian police during an early morning raid on Wednesday.

Officers had been tipped off by the brother of a COVID-19 patient who had been asked for 82,000 soles (about £15,200) to get an intensive care bed and medical treatment.

Image:
Nine people were arrested over the bed-selling scandal

The scam at the hospital was described as “totally reprehensible” by Health Minister Óscar Ugarte.

He added: “We cannot be negotiating with people’s lives.”

When the pandemic was at its worst, many Peruvian patients paid a lot of money to private clinics, as the public health system was on its knees.

But the hospital involved in the bed-selling scandal is supposed to provide free care, although the wait for one of its 80 intensive care beds can be long.

In March last year, the number of available intensive care beds in Peru was in the hundreds, but it is currently at around 3,000, although they are in high demand. 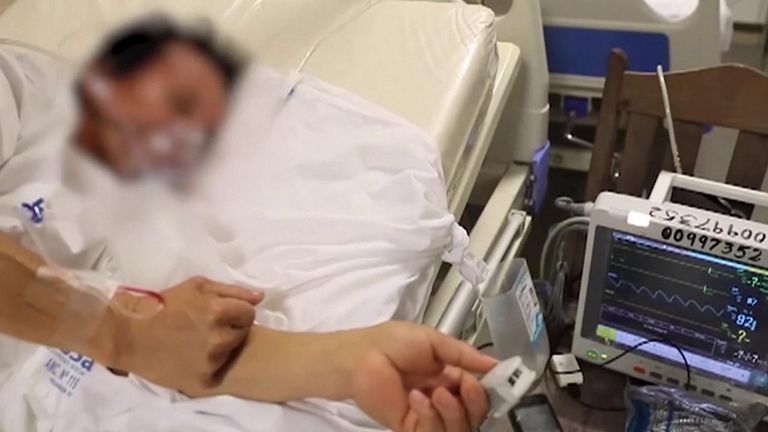 Image:
The hospital in Peru’s capital city of Lima was meant to provide free care

There have also been claims that some top officials got priority access to vaccinations.

The country’s health and foreign ministers resigned over that scandal earlier this year.

Peru has had more than two million confirmed cases of COVID-19 and more than 195,000 deaths have been attributed to the disease.

Around 10 million doses of coronavirus vaccine have been administered, in a population of almost 33 million people.