COVID-19: Around 10,000 food supply chain workers will become exempt from self-isolation rules as daily testing is phased in

Around 10,000 workers in the food supply chain industry are to become exempt from coronavirus self-isolation rules – but this will not include supermarket staff, the government has said.

Environment Secretary George Eustice said the government has identified “up to 500” distribution centres and food supply chain hubs where workers could be part of the scheme.

Anyone involved will soon not have to isolate for up to 10 days if they come into contact with a positive coronavirus case.

Mr Eustice said the exemption will begin for 15 “priority testing sites” on Friday, with workers there moving on to a daily testing regime enabling them to go into work if they test negative each day, instead of having to quarantine.

Image:
Empty shelves have been spotted in recent days as many workers have been forced into self-isolation after being pinged by the app

The system will then be rolled out to a further 150 supermarket depots next week and “several hundred” food manufacturers thereafter, Mr Eustice said.

“We recognise there are some staff absences in the food supply chain so we are announcing for the top 400 or so sites, things like supermarket depots and some of the key food manufacturers, we’re going to change the system to enable them to test to return to work.

“So someone who is contacted by Test and Trace or is pinged will be able to have daily contact testing and carry on working providing they test negative.”

“Anybody who is working at one of these sites but who is currently isolating would be able to return to work and go into this testing regime instead of continuing to isolate,” Mr Eustice said.

Pressed on why supermarket store staff are not included in the plans, the environment secretary said: “We recognise that there are absences in individual stores but we judge that the priority is to get distribution working again so that we can get food to those stores. 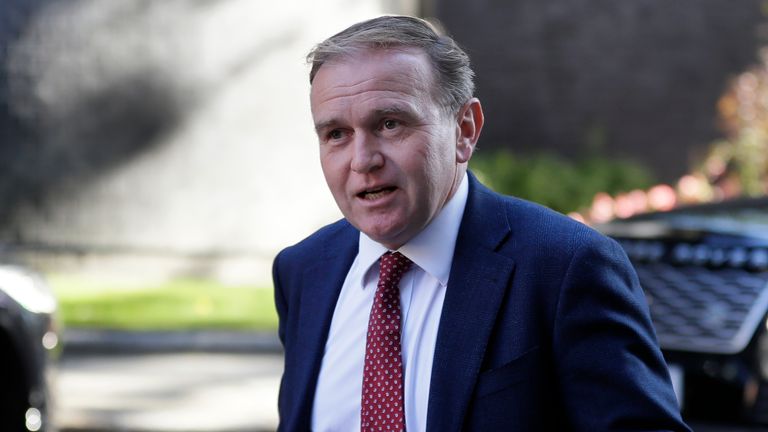 Image:
George Eustice said the scene would not apply to shop floor supermarket staff as this would see a ‘major departure’ from the test, trace and isolate scheme

“It is the case that some stores have absence levels that does mean that sometime towards the end of the day they don’t have stock on shelves as they might have done.

“But to include tens of thousands of stores around the country would be a major departure from the test, trace and isolate approach we have got.”

It comes as firms have warned of increasing staff shortages caused by people being forced to self-isolate by the NHS COVID app.

Iceland said on Monday that it has had to shut some stores as a result and other retailers said they are under “increasing pressure” to keep shelves fully stocked due to the so-called “pingdemic”.

But on Thursday at a roundtable with supermarket leaders, Mr Eustice and newly-appointed Health Secretary Sajid Javid outlined plans for daily contact testing for workers in the food and drink industries. 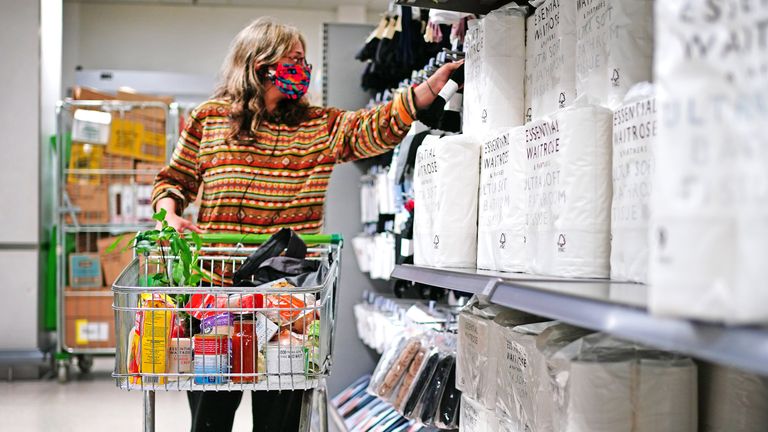 Image:
The government has said people do not need to panic buy

If they test positive, they must still self-isolate for the full 10 days.

The government said it will continue to “engage” with the food sector and “provide all support needed”.

Mr Eustice described food businesses as the “hidden heroes of the pandemic”.

“We are working closely with industry to allow staff to go about their essential work safely with daily testing,” he said.

“The last 18 months have demonstrated that we have a highly resilient food supply chain. There are sufficient food supplies in the system and people can and should shop as normal.”

And Mr Javid added that food and drink sector workers have “overcome enormous challenges and done everything they can to keep our shelves stocked and our fridges full”.

“As we manage this virus and do everything we can to break chains of transmission, daily contact testing of workers in this vital sector will help to minimise the disruption caused by rising cases in the coming weeks, while ensuring workers are not put at risk,” he said.

Please use Chrome browser for a more accessible video player

The government added that “critical roles in the food supply chain” will also apply to the new isolation rule.

“Employers are already in contact with Defra (Department for Environment, Food and Rural Affairs) and approvals will follow shortly for named critical workers to attend their workplaces when they’re fully vaccinated and the contact of a positive case,” they said.

Earlier on Thursday, Business Secretary Kwasi Kwarteng told Kay Burley on Sky News the list of those exempt from isolation would be “quite narrow”.

Responding to the announcement, Helen Dickinson, chief executive of the British Retail Consortium, said: “We welcome the government’s rapid response to this unfolding ‘pingdemic’, which has impacted shops and distribution centres.

“Retailers are working closely with government to identify hundreds of key distribution sites that will benefit from the new daily contact testing scheme. It is absolutely vital that government makes up for lost time and rolls out this new scheme as fast as possible.

“Disruption is limited at the moment, and retailers are monitoring the situation closely. Government will need to continue to listen to the concerns of the retail industry in the coming days and must be prepared to take further action if necessary.”

Psaki grilled by reporters on sale of Hunter Biden’s artwork